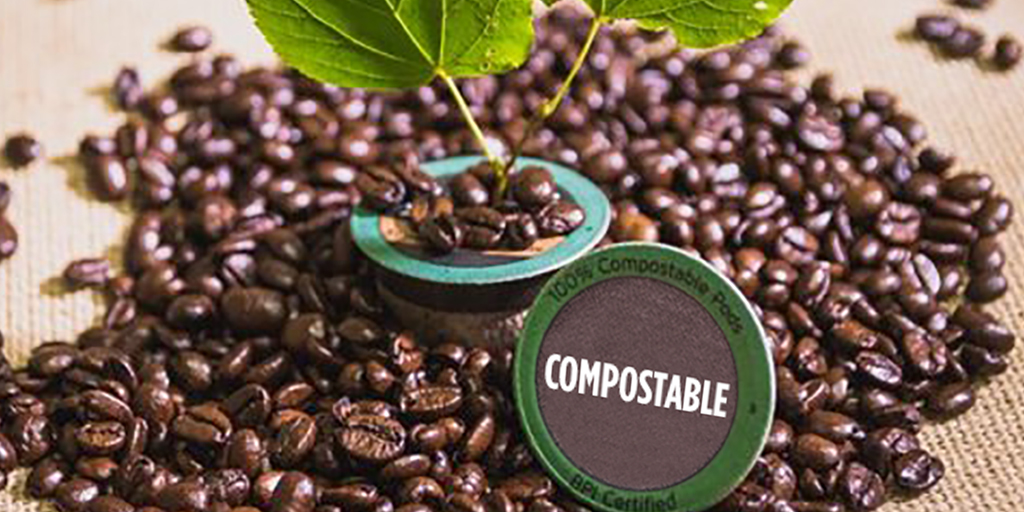 Q: Canadian broadcaster CBC aired a news report about compostable consumer products. What did they claim?

A: The CBC reporter made a factually incorrect case that our plant-based compostable coffee pods actually don’t get composted but rather go straight to landfill. She went on to claim that labeling these pods as compostable if they go to landfill is “greenwashing”, the practice of some companies who make environmental (green) claims which are not supported in physical reality.

Q: What are your compostable coffee pods made of?

A: Our compostable coffee pods are more than 85% coffee grounds (real, actual coffee) with a paper lid, a coffee filter made from cornstarch, and a plant-based compostable ring made with coffee bean husks (that’s why they’re brown!). They might feel like fossil-fuel-based plastic, but they’re actually plant material that we’ve ground up and heated and formed to provide strength to the coffee pod, which then biodegrades after use.

A: Yes! Our pods have been designed from the start to be composted in all types of municipal composting systems, both aerobic (oxygenated) and anaerobic (without oxygen). We spent over $15M in R&D with partners like the University of Guelph, one of Canada’s top green technology universities, to develop a science-based approach to reducing single-use plastic and greenhouse gases in single-serve coffee.

Q: Have you ever tested your compostable pods in actual municipal composters?

A: Yes! And we have passed multiple tests in both Canada and the US. In the US, we are approved by the national Compost Manufacturing Alliance, the largest group of municipal composters in the country. And we have been accepted in lots of municipalities such as Seattle, San Francisco, and in up-state New York. Many other municipalities are currently building and upgrading their systems to accept compostables.

Q: So do your pods get sorted out in pre-processing and go directly to landfill as the episode claimed?

A: No. In most municipal food waste collection processes, the food waste (including compostable coffee pods) gets dumped at the compost facility as a large disgusting mess filled with lots of paper bags holding food waste as well as a lot of loose material, some of it already partially decomposed. At an anaerobic composter like at the City of Toronto, the food waste is loaded in bulk (no pre-sorting as you might find in a recycling plant) into a machine called a hydro pulper, which is a large, whirring machine that uses a mechanical rotor and water to remove non-compostable materials, known as contaminants.

Those contaminants, which often include items like parts of disposable diapers and sanitary napkins, plastic bags, and light items (cutlery, straws), float to the top of the pulper and get skimmed off. Heavier contaminants — glass, metal, stones, and shells — fall to the bottom and get removed. The top and bottom contaminants go to landfill.

Compostable coffee pods break apart quickly and become part of the good “middle layer” of compost. For more details, check out the City of Toronto test report where compostable pods were given a passing grade.

Q: So the municipalities’ own tests show that your compostable pods work fine in their systems, and that most pods that are collected as municipal food waste (e.g.: in the green bin in the City of Toronto) actually do end up getting composted. Then why don’t more municipalities “officially accept” them?

A: We believe that some municipalities are concerned that “officially accepting” compostable coffee pods will mean that consumers might get confused and put plastic coffee pods into the food waste stream creating more contamination. Club Coffee has developed and will fund consumer education programs that will minimize this issue.

We believe that some municipalities have economic concerns, but studies have shown that compostable pods are not only significantly better environmentally than plastic cups, they are also better economically for the municipalities. A recent study by Calvin Lakhan, Ph.D, at the Faculty of Environmental Studies at York University found:

And some municipalities just aren’t keeping up with the state of compostable technology. As Professor Amar Mohanty, OAC Distinguished Research Chair in Sustainable Biomaterials, at the University of Guelph says:

The CBC coverage also failed to recognize that there is progress toward formal acceptance. The Ontario government heralded Club Coffee’s compostable pod innovation on page 43 of their environment plant “Preserving and Protecting our Environment for Future Generations: A Made-in-Ontario Environment Plan”. The plan explicitly cites their priority to: “Ensure new compostable packaging materials in Ontario are accepted by existing and emerging green bin programs across the province, by working with municipalities.” This is not “greenwashing.”

In the meantime, Canadians have enjoyed over 1 Billion cups of coffee made from our compostable coffee pods, and all of these have been processed by Canadian municipalities.

Q: Are your pods scientifically verified by any third parties?

A: Club Coffee’s coffee pods meet the internationally-established standard of 100% compostability as certified by the Biodegradable Products Institute (BPI). This is a US-based independent certification organization which ensures that any product they certify is fully compostable (all components) into good compost soil with no soil toxicity.

Q: After composting, what do your compostable pods break down into?

A: Our plant-based coffee pods were specifically designed to break down into the compost equivalent of food waste, like banana peels or corn cobs. In fact, our pods biodegrade faster in municipal composters than many food wastes like cherry pits, chicken bones, and corn cobs.

Q: Can I put these pods into my backyard compost?

Q: Are your compostable pods better than plastic pods/cups?

A: We believe our plant-based compostable pods are better in 3 important ways:

Q: Are compostable plastics a good solution to the single-use plastic issue?

A: Compostable plastics and composting have been referenced as an evolution and “Future of Plastics” – these two articles highlight the reasons why:

Q: Why even bother with coffee pods, they seem wasteful?

For further questions, please contact us! We’d love to hear from you.

Sign up and be the first to receive updates, hot off the press.